Last Wednesday, Carolina Performing Arts held a special discussion for health affairs and medical students and faculty, on the topic of their recent production of Antigone. The discussion covered many points, focusing on the performance from a health humanities perspective.

The conversation began by going around the room and allowing everyone to share one word that came to mind when they thought of the production. Among the responses were descriptions such as justice, turmoil, strife, mourning, and reality. Many of the words and sentiments shared in the first few minutes of the discussion translated into later parts of the conversation.

One question the attendees were asked to think about concerned which character they found themselves identifying with throughout the performance. Antigone’s deep love for her family resonated with the discussion participants, and they were able to relate to her desire to support her family and defend their honor. Additionally, a large number of people found it easy to relate to Ismene, Antigone’s sister, because of the manner in which she was portrayed along with the role that she played in the production. As a more cautious individual, Ismene served as an intermediary between Creon and Antigone. For the most part, she was seen as having set aside her emotions and grief for her brothers in order to serve as the neutral party, and a majority of the discussion attendees agreed that this role Ismene was given in the production is one that all health professionals have a responsibility to fulfill in real life.

A second topic that participants were asked to consider dealt with the elements of the performance that stuck with them. The visuals presented throughout the production came up in regards to this question, and many stated they went home attempting to interpret them after the fact. Some of the visuals that stood out the most were the videos of the children that were played. The way that the chorus members would stop and watch the videos seemed to highlight that this message was a lesson – perhaps one of innocence, simplicity, and vulnerability – for them to learn. Many of the attendees felt that these visuals helped ground the audience in the present, and made them consider how the play and its message apply in today’s society.

Thinking of the current applications of this play, specifically in the realm of health care, many topics came up including the meaning of death and natural law versus the law of the state. The play inspired important questions relating to the meaning of death. Among the interesting points that were brought up, the idea of mind-body dualism and how its perception has changed over time was discussed. Most agreed that in medicine today, it is easier to separate the mind from the body, but in ancient Greece, the two were so intertwined. This link ties into the idea of eternal damnation if the body is not treated right. With Antigone in particular, attendees got a sense of her wanting to be remembered for her actions after her death, which brought about discussions of dignity and how honor is still somewhat tied to the treatment of a body after death.

Finally, for many, the polarity of Antigone and Creon in decision-making stood out significantly, highlighting the relational manner in which Antigone handled the conflict of the play as opposed to the principle-based manner that Creon employed when making his decisions. Their opposition was described as natural

law versus the law of the state. An important concept that was taken away from Antigone and Creon’s disagreements is situations do not always fit neatly into defined categories; there are always elements that make situations unique, and health professionals must be able to adapt to accommodate this reality. 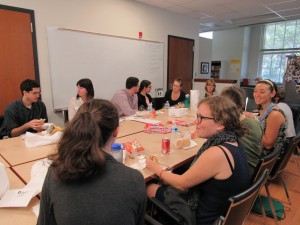