Dr. Jordynn Jack’s ENGL 695 class researched the lives of 19th century patients from Dorothea Dix Hospital as a part of their research training. Endeavors featured their work in a recent article in conjunction with Bobby Allen’s research on the same project.

During the 2018 Spring semester, students in Health Humanities Intensive Research Practice transcribed and built case studies from hospital entries between 1861 and 1871– a decade overwhelmed by Civil War soldiers returning from battle, consequences of war that could lead to mental health issues, and the first admittance of African Americans to the hospital. 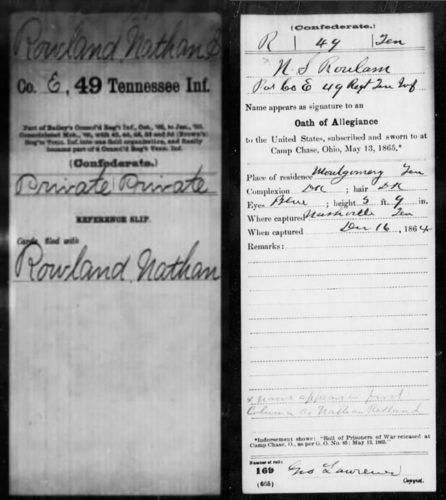 Using Fold3.com, a military database, Emily Long found Nathan Rowland’s enlistment papers, as well as his Oath of Allegiance to the United States after the Union won the Civil War.

Jordynn Jack, the professor over the class, says her students dove into their work wholeheartedly. “They’re not just doing research that’s already been done; they’re doing original research ­– for them that’s a really valuable thing.”

Emily Long, for example, researched the life of Nathan Rowland, a young man from Morrisville, North Carolina, who fought for the Confederacy.

“I was interested in his experience within a historical context because, to an extent I guess, we’re all products of our time,” Long says.

Working backwards from the admissions ledger, Long found Rowland’s enlistment date and regiment. From there, she researched 10 battles and skirmishes he fought in, as well as his time as a prisoner of war in Illinois and Ohio.

After a three-and-a-half-year enlistment, which was only supposed to last one year, Rowland returned to Wake County. He reported having attacks of mania, but doctors attributed that to cardiac problems. This was often the diagnosis for soldiers experiencing post-traumatic stress disorder at that time: Doctors believed their hearts had been overworked.

In 1866, Rowland was admitted to Dorothea Dix Hospital where he remained for 16 years. Although marked as “unimproved,” and removed from the hospital in 1882, he was readmitted in 1890. The ledger explains that Rowland died in 1909 of “malarial chill.”

Long gathered a detailed, decades-long account of Rowland’s life, but itched to find out more. The experience of uncovering the life of someone who lived over 150 years ago was worth this frustration, she says.

“In a lot of courses, you don’t get to do as much hands-on stuff,” she says. “I thought it was cool we got to go through and try to figure out details of these peoples’ lives and what their experiences might have been like.”

Community Histories Workshop members hope visitors to the park will share that same eagerness to learn.

Check out the full article here.