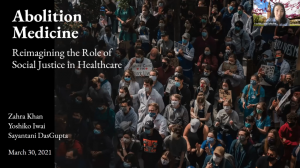 The COVID-19 pandemic has forced us to reevaluate the lens through which we view healthcare and the future of medical practice. The pandemic has put medicine into crisis, but at the same time, the past year has provided humanity the opportunity to work towards more equitable systems of living and leave behind practices that don’t benefit us. Racial violence is a public health crisis, and now is the time to work towards its elimination.

On March 30, Dr. Sayantani DasGupta, Zahra Khan, and Yoshiko Iwai presented the practice of abolition medicine in their Health Humanities Grand Rounds talk entitled “Abolition Medicine: Reimagining the Role of Social Justice in Healthcare,” a recording of which can be viewed on the HHIVE Lab YouTube channel. All three speakers were linked by their involvement in Columbia University’s Narrative Medicine program as well as their general interest in the health humanities. Together, the three of them delivered a powerful presentation that delved into many of the past and current healthcare inequities. Dr. DasGupta, originally a physician, is a lecturer in Narrative Medicine at Columbia University and teaches in the Center for the Study of Ethnicity and Race and Institute for Comparative Literature and Society. Khan teaches in the Narrative Medicine program at Columbia and is a co-chair of the Narrative, Health, and Social Justice seminar. Finally, Iwai is a current medical student in the UNC School of Medicine and a graduate of Columbia University’s Narrative Medicine and Creative Nonfiction programs. All three are accomplished writers with academic texts published in places like Academic Medicine, Journal of Medical Humanities, Scientific American, Journal of Medical Ethics, and more. In July of last year, DasGupta, Khan, and Iwai published “Abolition Medicine” in The Lancet, which served as the basis for their talk. 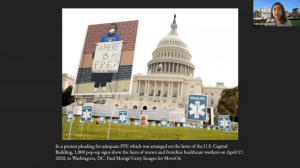 Narrative medicine, as Iwai described, honors stories in healthcare. It informs us how to deal with conditions of disability and illness and teaches us that stories matter, particularly during moments of crisis. Narrative medicine captures whose voices are heard and whose voices are silenced as well as the people who are framed as heroes and those who are framed as villains. In the spring of 2020, when new cases of COVID-19 began to increase in the U.S. drastically, healthcare workers weren’t just glamorized but militarized as well. Iwai highlighted that doctors and nurses are not soldiers, and there are repercussions that come from healthcare workers’ militarization. While COVID-19 deaths were skyrocketing in the late spring of 2020, expensive gestures such as flyovers were used to celebrate healthcare workers as heroes when these funds could have easily gone towards supplying doctors and nurses with more PPE.

Much like how firefighters were seen as heroes during 9/11, healthcare workers were seen as heroes during the pandemic. In both scenarios, Khan states that these metaphors have perpetuated xenophobia. The “healthcare heroes narrative” has made it seem like that America and Americans must be protected from external threats, which has contributed to the increase in anti-Asian racism and violence during the COVID-19 pandemic. Dr. DasGupta noted how during the summer of 2020, healthcare workers went from being viewed as heroes to being harmed during Black Lives Matter protests across the nation. The same doctors and nurses who would protest for racial justice would have their medical tents destroyed by police, even though they were publicly celebrated just a couple of weeks earlier. As a result of the police’s violent actions during BLM protests last summer, conversations about the police’s threat to public health increased. More Americans were finally asking: “Who do you serve, who do you protect?” 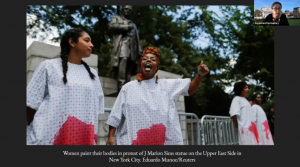 Medicine was founded on racism, and many of these racist practices are still being taught today.  Dr. DasGupta talked about several instances of medical racism throughout history. For example, Dr. James Marion Sims, the inventor of the pelvic speculum, performed unanesthetized surgeries on slave women with his new invention. Another infamous example of medical racism is the Tuskegee Syphilis study, where Black men with syphilis were denied treatment so that researchers could observe the health effects from syphilis when left untreated. Even today, many medical students falsely believe that Black and White patients feel pain differently. Beliefs such as these lead to inappropriate treatment towards Black patients and is the cause of an incredibly high infant mortality rate among Black women.

Police violence, just like racism in medicine, is a threat to public health. Dr. DasGupta emphasizes that the police have failed to protect America’s most threatened communities, and the police’s brutality is a direct result of police officers and police funding. Furthermore, Dr. DasGupta emphasizes that reform such as anti-bias training hasn’t been able to curb police violence. There must be a structural change, and something must be done about the police state itself. Abolition medicine works towards alternative community care systems to protect those most at-risk of the public health emergency that is police violence. 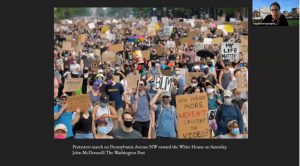 Abolition medicine, as Khan described, says that current systems must be broken down to create more fair systems of living that will lead to a more just society. The military-industrial complex, the prison-industrial complex, and the medical-industrial complex are all tied through methods of policing. Abolition medicine is the organizing tool to address the harm caused by the medical-industrial complex, which was influenced by both the military and prison industrial complexes. The Black Panther Party’s Free Breakfast Program was a mutual aid that fed thousands of children across the country, and community-based initiatives designed to curb police violence and assist communities are still in use today. M.H.First in Oakland is a project that provides mental health services to members of its community. The mission of M.H.First is to provide these services without any police presence in an attempt to reduce the risk of police violence. There are hundreds of mutual aids across the country that promote the ideals of abolition medicine and the creation of initiatives that actually serve the community.

Iwai said that if medicine wants to do no harm, we must move away from harmful systems and build new alternative practices. It is not enough to only demand for change after a horrific racially motivated incident is broadcasted on the news. Abolition medicine is constant and is always trying to dismantle the oppressive systems that harm the most vulnerable every day.

Noah Ashenafi is an undergraduate senior majoring in Nutrition and minoring in Medicine, Literature, and Culture. He has interests in alternative medicine and using teachings from the health humanities to provide patients with optimal integrative care and treatment.