During her talk, Dr. Buchbinder defined control as the human desire to master the idea of life and death. She related the human experience of death to the advent of modern technology and the ability of biomedical techniques to prolong human life to lengths never seen before. The shift of medicine towards a more technologized process turns death from something that happens naturally to something that we do. Dr. Buchbinder stayed on this distinction at several points throughout her talk to consistently identify how societal attitudes towards dying have changed. Furthermore, Dr. Buchbinder discussed the idea of control from a personal and patient-centered level. She described medical aid in dying (MAID) to give patients the opportunity to choose their own experience of death. The process allows terminally ill individuals to have the ability to control the progression of their illness and the meaning of their death on a personal and spiritual level. This idea is closely related to the other governing concept of Dr. Buchbinder’s talk: agency. Dr. Buchbinder defined agency as “the capacity to act with intention” and closely related this idea to the bioethics concept of autonomy.

Another key concept about medically assisted dying is the idea of framing it as an “aspirational death”. Dr. Buchinder used this term to explain the accessibility of MAID across factors such as illness, illness progression, and social, economic, and other characteristics and circumstances. MAID is constructed as a death that allows the patient to orchestrate their own experience of dying in accordance with their values and aesthetic desires, but this is near unattainable in reality for many people.

Dr. Buchbinder took some time to discuss MAID from the physician’s perspective. She specifically discussed how there is an idea that physicians are either completely for or against the idea of MAID, yet her research finds that participation and opinions on MAID within the medical community are more nuanced. Dr. Buchbinder describes one physician who specifically viewed MAID as “a departure from her professional role”. This is consistent with what the AMA says about MAID being “difficult to control” and “a departure from the role of a physician”. However, despite these views regarding MAID being a concept outside a physician’s realm, this doctor believed it was necessary in order to support the patient and their wishes. Another physician Dr. Buchbinder mentioned had a similar view. This second physician believed that the role of the physician was to commit themselves to the care of the patient, which meant supporting the decisions of the patient without overstepping their own boundaries as active caregivers.

Another key perspective Dr. Buchbinder touched on was that of the patients and caregivers. Many patients involved in MAID were glad to be a part of the process and glad to have that option because of the way death is constructed as a medical procedure today. Dr. Buchbinder addressed these desires through talking about the sociality of assisted death. Dr. Buchbinder discussed how assisted dying was preferable for terminally ill patients because they are able to choose to die the way that they want. They are able to have their friends and family near and can die surrounded by love in a place that does not have the desolate feel of a hospital.  Furthermore, caregivers felt that MAID allowed families to choose a death and make it as personally significant and meaningful as possible. Caregivers were also able to play a more important role in understanding their loved one in the last days of their life as well as supporting them through those final moments in ways that are more meaningful to the patient in ways that would be otherwise unattainable.

I found Dr. Buchbinder’s talk to be really eye-opening. This talk showed me how death has become a medicalized concept that is seen as the ultimate failure of a physician, when in reality, it is an unavoidable natural part of life. I realized that death can be freeing, and it is vital to allow individuals to choose the way that they want to die at a certain point and make those last moments as personally significant and meaningful as possible. The role of the physician is less to fight death, but to support their patient in their life and transition towards death.

Dr. Buchbinder also spoke about the opposing perspective where MAID can become a slippery slope, especially in relation to disability rights. This view was also interesting to hear because there is a history of ableism, racism, sexism, etc. in healthcare, so understanding these layers of social influences in any medical decision is vital to understanding its ethical and practical implications. These social influences not only inform the applicability of the legislature but also its accessibility. Currently, there are very few states that have MAID options available. Even in the states that have legislation allowing this avenue, receiving it requires a high-level of care and several hurdles to jump through that many people do not have the means to accomplish. Furthermore, Dr. Buchbinder mentioned that several times the trajectory for MAID is missed and even those who are eligible miss out simply due to the sometimes unpredictable nature of an illness progression and the contention surrounding writing this kind of script. Overall, I believe that I was able to come out of this talk with a more open and understanding view towards MAID. This talk has shown me MAID is more than just a medical intervention, but a way for patients to attain a death by their own terms and wishes. 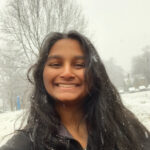 Teja Siripurapu is a sophomore at UNC studying Psychology and Public Policy. Her interest in the humanities greatly outweighed her interest in medicine. She never wanted to get into the nitty-gritty science stuff that she grew up believing doctors and healthcare professionals did. She’d always assumed that eventually, she needed to give one up to have the other. Coming to UNC and having the privilege to get involved in organizations such as HHIVE and take classes in the health humanities showed her not only how possible it is to have both but how vital it is. Teja learned that the key to being a good healthcare professional is to have an in-depth understanding of the population you serve, which is only possible through the health humanities. In the future, she hopes to serve the underprivileged population of North Carolina, and someday beyond, by employing this knowledge and expertise in the hard sciences and humanities. She hopes to bridge healthcare gaps and improve health infrastructure. She is committed to ensuring that health knowledge, health literacy, and health competence are readily accessible to all individuals.