Responding to patterns of industrialization and institutionalization in the nineteenth century, degeneration theorists like Bénédict Morel, Cesare Lombroso, and Max Nordau became convinced that the human race was in mental and moral decline. Degeneration theory conflated mental disability with immorality and criminality, classifying vulnerable populations as dangerous deviants to
justify incarceration and eugenics. In this lecture, Dr. Quirici uncovers racialized and gendered discourses of degeneration in twentieth-century Ireland, where the Catholic Church exerted authority over life and literature alike. Fear of degener 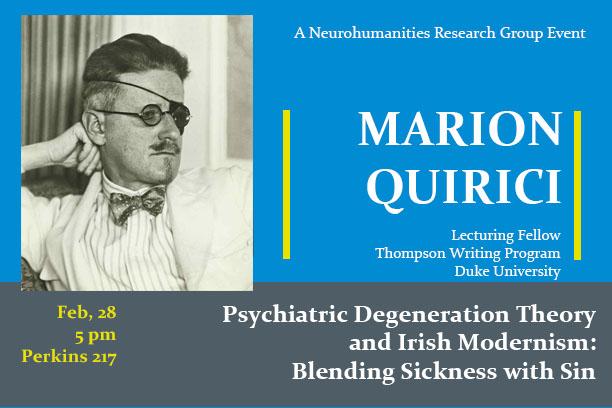 ation influenced the confinement of unwed mothers in Magdalen Laundries, the creation of the Gaelic Athletic Association, the nationalist
uprising, and the decisions of the Censorship Bureau. With particular emphasis on James Joyce, who was characterized as a degenerate whose art would spread both sickness and sin, Dr. Quirici argues that resistance and critique of degeneration theory was a defining strategy of Irish modernism.