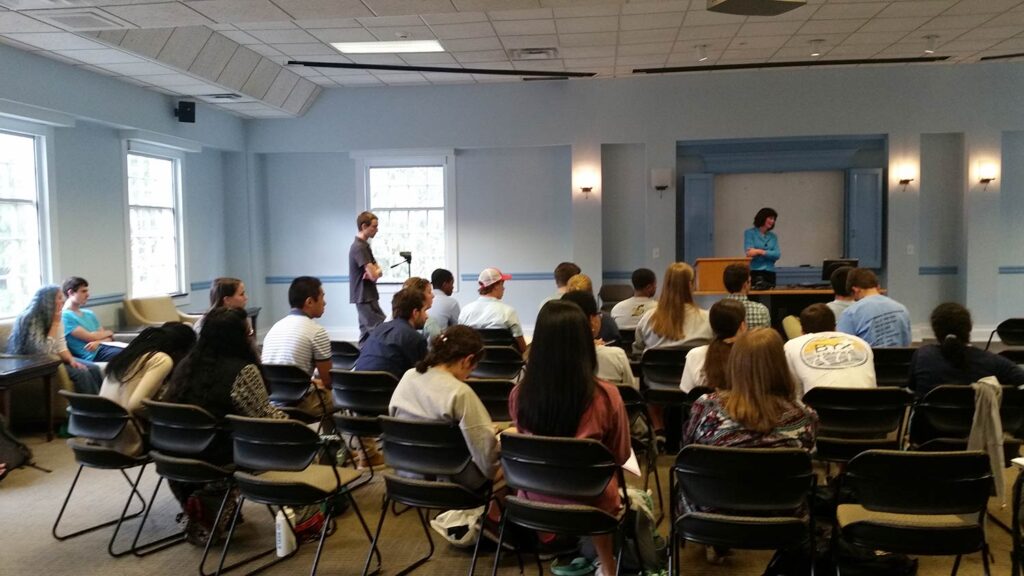 Laura L. Knoppers is currently an English Professor at the University of Notre Dame. She has a Bachelor of Arts degree from Calvin College, and a Master of Arts degree and PhD from Harvard University. Knoppers takes a cross-disciplinary approach to the early modern period, focusing on intersections between literature, politics, religion, and visual culture. Widely published on seventeenth century literature, politics, religion, and visual culture, she is most recently the author of Politicizing Domesticity from Henrietta Maria to Milton’s Eve and editor of The Oxford Handbook of Literature and the English Revolution. Her Oxford scholarly edition of Milton’s Paradise Regained and Samson Agonistes won the 2008 John Shawcross Award from the Milton Society of America. Knoppers is a past chair of the Northeast Milton Seminar and a past president of the Milton Society of America.

Last Wednesday, Dr. Knoppers gave her talk “‘By her owne directions’: Margaret Cavendish, Gender, and Early Modern Medicine” as the first installment of the Critical Speakers Series at UNC, which features outstanding and innovative scholars in the literary humanities and showcases their contributions for the larger University community and the public. She began with a recipe taken from a letter from William Newcastle to his wife, Margaret Cavendish, about the best way to fatten a chicken. Dr. Knoppers thus largely situated her analysis of Margaret Cavendish in dialogue with medical advice widely circulated at the time. She also used the familial correspondences between Margaret Cavendish, William Newcastle, and their family physicians to gain a new perspective on the continuously vexed questions of Cavendish, gender, and early modern medicine.

In examining the correspondence between William Newcastle and the family doctor, Dr. Knoppers emphasized the extent to which Margaret Cavendish resisted the doctor’s recommendations and instead chose to act “by her owne directions.” Although her hypochondriacal husband was continually worrying after Margaret’s ailments and seeking advice, Margaret instituted her own medical regime in direct opposition to her doctor’s recommendations. In doing so, Dr. Knoppers claimed, Cavendish inverts the paradigm of advice giving from the masculine realm and redeploys female knowledge in the service of medical advice. The “gender” aspect of Dr. Knoppers’s talk thus mainly dealt with how women in the early modern period could employ, imitate, and reshape humoral medicine to gain agency over their own bodies and households.

In terms of her authorship, Dr. Knoppers claimed that Cavendish’s work allowed her a vehicle through which to communicate her expertise and treat her ailments herself. In this way, Cavendish may show off her knowledge of humoral medicine at the expense of male physicians and challenge the assumption that writing books is bad for her health. She also offers the kinds of knowledge she finds wanting in physicians; that is, a uniquely female way of observing diseases and breaking them down into their causes and effects. Bodies in Margaret Cavendish’s medical practice are thus not essentialized forms but subject to intervention and change.

Dr. Knoppers concluded her talk with a discussion of how Galenic medicine informed Cavendish’s satirical utopia, Blazing World. In her female appropriation of knowledge, Margaret Cavendish uses the novel to feature female protagonists who are excellent at giving advice. Their advice is always cheerfully asked for and given, and always opposes the advice given by the witless doctor of the story. In conclusion, through Dr. Knoppers’s original analysis, we may begin to rethink the role of female-authored household knowledge in the early modern period and particularly how this knowledge influenced Margaret Cavendish’s thoughts and writing.