Near the beginning of her career, Marion Quirici was struck by the “impossibility of survival with dignity for people with disabilities under neoliberalism.” As the co-director of the Health Humanities Lab at Duke University, Quirici studies the lived experience of those experiencing both mental and physical disability. On November 5th, she came to the HHIVE Lab to present this research and facilitate discussion on the changing paradigm surrounding citizenship and disability that she sees as the future.

Quirici began her talk at HHIVE with an interactive word cloud activity where participants were asked to describe democracy in a few words. Historically, the arguments for equality have included points about how those typically discriminated against maintain the same capabilities as those at the top and therefore should be treated the same. For example, feminism argues that women can do anything men can do. However, this type of argumentation excludes those with different physical and mental abilities and can lead to dehumanization based on perceived “merit.”

Quirici then asked her audience to read five news articles each describing a different story of a person or people with a disability and describe how the disability was perceived and what potential consequences arose. The articles included instances of police brutality against those with mental illness, harassment of those in the LGBTQ+ community, lack of home health workers, and environmental factors influencing disability in Flint, Michigan. The exercise showed that no instance can be confined to one social disparity and all had broader potential barriers to equality and the destruction of ableism.

Finding it unfair that the concept of “justice for all” excludes a significant portion of the American population, Quirici teaches courses at Duke on disability studies writing and makes college more accessible to those with a physical or mental disability. She has mentored many activism projects including student created paintings, podcasts with prominent disability advocates, and awareness campaigns which she has compiled at tinyurl.com/disabilityart. All of these projects aim to show that disability justice is future oriented and those who wish to pursue it have to visualize a world that does not yet exist. Visionaries at both UNC and Duke are working on this goal, but it will not be without the participation of the majority that this goal can be accomplished. Democracy rejects that all humans have to be physically and mentally equal to be deserving of equal rights and it is time to see that change, starting right here on campus. 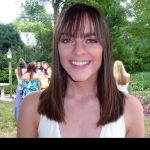