Physician burnout is often described as the physical and emotional exhaustion that many healthcare providers experience due to the demanding, incremental increases in working hours as well as the overwhelming working environments. In fact, many physicians complain that the constant stress and time spent on documentation often leads to their depersonalization with patients, an issue that only furthers the dangers of emotional and psychological alienation within the healthcare environment. Even as the COVID-19 pandemic eases, the practice of medicine still remains at its ultimate crisis point. The burning question remains: how do we solve burnout? In her presentation, “The Power of the Voice: Storytelling, Medicine, and The Nocturnists,” Dr. Emily Silverman, an internal medicine physician at the University of California San Francisco (USCF) and creator/host of the podcast, The Nocturnists, discusses this problem and emphasizes the importance of healthcare provider storytelling as a means to address the issue of physician burnout and to hopefully incite change within medical culture.

Before delving into the impact of The Nocturnists, Dr. Silverman first shared her journey and personal experiences as an aspiring young physician. At the age of five, she knew wanted to be a doctor. Her initial curiosity of the human body drew her into the medical field. Little did she know that it would be this same curiosity and passion that would then land her a position in the Internal Medicine Residency at UCSF. However, from there, her life started to undergo a drastic cultural shock. As a young person and developing physician, she encountered many difficult issues like illness, suffering, and death that made her face her own mortality. In addition to this, she expected to be actively engaging with patients rather than spending half of the day sitting in front of a computer. It was through these moments that she began to realize the dysfunction of the American healthcare system, a system that only focused on the “flesh, genes, and organs, but not the human being, the story, and the spirit.” She mentioned that these depersonalized experiences not only caused her to grieve her patients, but also parts of herself, the parts of her being that connected to her humanity, her creativity. She felt herself becoming a “check-list machine” pounding off notes, day after day; she felt herself succumbing to the relentless culture that valued supply and demand over the humanity and experience of the human being. Because of this, she knew she needed an outlet, an escape.

Dr. Silverman defined physician burnout using three terms, each of which increased in severity: moral injury, exploitation, and abuse. She discussed the toxicity of the medical culture, the practice of making healthcare workers work about 80-100 hours per week, leaving them emotionally exhausted and sleep-deprived. The treatment of the body became framed in the center of this discussion. Through talks of distorted economies and healthcare economics, the attention towards the health and well-being of the body began to dwindle and fade ever-so-slightly to the background. Dr. Silverman compared the corporatization of the healthcare system to a system in which physicians, or rather, bodies were increasingly being bought and sold. This human barter system, a major contributor to the alarming rates of burnout, was leading the healthcare culture down a very dangerous path which could compromise patient safety.

In order to mitigate these problems, Dr. Silverman discussed how she found herself relentlessly driving around the city in hopes of finding a space where she could host her first storytelling meeting. Immediately after the meeting began, Silverman mentioned that she could already feel an unleashing of raw emotion as well as the “flattening of the medical hierarchy” as hurt and emotionally exhausted voices began to spring to life, meld together, and challenge the unsustainable healthcare worker conditions. This small group of forty people gained so much traction that it immediately transformed into a gathering of over 700 people in just four years. Dr. Silverman’s community of healthcare worker storytelling became a success story, even affecting individuals from remote parts of the country and other parts of the world. It also became a vibrant community for physicians and other healthcare workers to more actively engage in the celebration of their own humanity. The active listening and uncensored storytelling of others’ experiences and their suppressed feelings attempted to satiate the hunger in the healthcare community. And it was through this very hunger that The Nocturnists sprung to life.

From her own personal experiences, Dr. Silverman understands that today’s healthcare system is conditioning future physicians to become passive and obedient. Through The Nocturnists, Dr. Silverman is interested in inspiring healthcare workers to take their profession back by giving them a platform to share their voices and metabolize their experiences. As a certified nursing assistant, my day-to-day experiences with patients are constantly being challenged with the tiresome twelve-hour shifts that keep me on my feet. Although I am still fairly new to the profession, I can almost feel myself gravitating towards a place of burnout and isolation. However, after listening to Dr. Silverman’s talk as well as a couple of her podcasts from The Nocturnists, I felt that my experiences as a healthcare worker were being validated. I felt that I was no longer alone with my own feelings but rather surrounded by a community of other healthcare workers and physicians who were undergoing similar experiences. Dr. Silverman’s platform gave me a sense of belonging as a powerful means to combat the problem of burnout in the healthcare system. 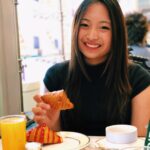 Noelle Escobal is a junior majoring in English and Comparative literature with a minor in Chemistry. Her interest in the health humanities stems from a curiosity in how her humanities major can intersect with STEM and other health related fields. She is also a passionate food blogger, and now serves as part of UNC’s first undergraduate culinary medicine club where she can engage in both her love of food and learn more about nutritional values in health and medicine. As a pre-med student, her goal is to approach the health institution with a food-minded perspective that empowers patients and other healthcare providers to engage in healthy lifestyles. She finds the exposure to health and humanities as well as nutritional education central to developing healthier, more modern medical practices as well as better patient-centered healthcare providers.